Without GRUB, you can't boot in to OSs. Windows, Mac and other OS have their own bootloader. Linux too have different bootloaders. GRUB, BURG are examples.

When you install Windows after you install Ubuntu, Windows replaces the GRUB in the Hard Disk to Windows' boot loader which won't identify Linux systems (Damn you Windows !). But, our GRUB detects every OS. So, it's better to have GRUB over Windows Boot Loader.

You have to re install GRUB after the following scenarios :

Insert the CD or Pendrive that has Ubuntu in to your computer. 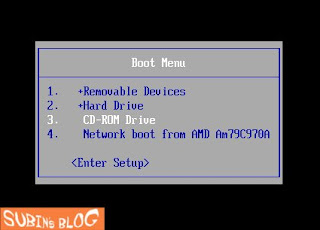 Restart your computer and press F12 repeatedly until the BIOS Boot Menu appears. You can see 2 or 3 items in the menu.

If you inserted a Ubuntu CD then Select CD-ROM or others accordingly.

Note : Boot menu might change according to the BIOS version.

After selecting you will enter in to the Ubuntu Installation Process.

Select Run Ubuntu / Try Ubuntu from the options. You will now boot in to Ubuntu.

For more information about booting into Ubuntu from CD, see the official Ubuntu Community Page : Boot From CD

When you reach the Ubuntu Desktop, open the Terminal using CTRL + ALT + T key combination or by the Dash menu or on Old systems by Applications -> Accessories -> Terminal.

Mount the partition where your Ubuntu is installed. If you are not sure which it is, launch gparted (included in the Live CD) and find out. You can open gparted from the Terminal with the command :

Then bind the directories we need. Copy the whole command (it's separate commands wrapped into one) below and run it :

If your system uses UEFI for booting, you may need to do additional steps as mentioned here.

Then we need to be the super use of the installed Ubuntu. For that use chroot.

Now install, check, and update grub. Replace X in the following command with only the drive letter (usually a). Example: grub-install /dev/sda

GRUB is now installed in the MBR (Master Boot Recorder).

Now you can exit you mounted hard disk, and unmount everything we mounted

Restart your computer and you will get the default GRUB Boot Screen.

When you reboot after installing GRUB, you night not see Windows. To fix this do as below.

Boot in to the installed Ubuntu (not live CD) and open Terminal. Then do the following command :

It will ask for your password. Type it and press enter. Reboot your computer and you will see Windows now.